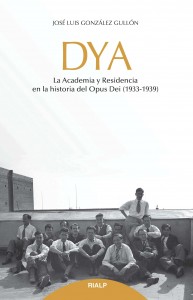 Professor José Luis González Gullón, a member of the St. Josemaría Escriva de Balaguer Historical Institute, has published a monograph on the first institutional activity of Opus Dei (Rialp Publishers). DYA, the initials stand for “Law and Architecture” in Spanish, began in December 1933 with the opening of a university preparatory academy in Luchana Street in Madrid. This monograph forms part of the Historical Institute collection of monographs.

Tutorial classes on a number of subjects which formed part of the preparatory courses for Architecture were given in the DYA Academy. The students who attended these classes frequently heard that if they wanted to work together so that a Christian spirit held sway in society then a thorough professional preparation was necessary. They had to understand that it was precisely in their academic activity that God called on them to give their best.

San Josemaría coordinated and often directed the Christian formation which was offered at the Academy. He gave many classes and encouraged the participants to take part in social activities and works of mercy such as catechesis or visiting the sick. Friends brought their friends and during the nine months that the Academy was open, there were more than eighty boys participating in some activity of formation both vocational and religious in nature.

In October 1934, DYA moved to 50 Ferraz Street in Madrid. Here a university residence was added. The economic challenges of making the project a success were enormous. Political and social events also took their toll on the residence. The October Revolution of 1934 paralyzed the city during the first days of the month and delayed the commencement of classes at the university. When the classes began, only one student had asked for a place. 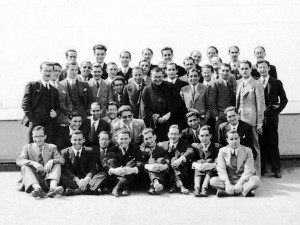 St. Josemaría Escrivá with a group of students in the DYA Academy in 1935

In this Residence, the Blessed Sacrament was present in a center of Opus Dei for the first time. On March 31, 1935, St. Josemaría celebrated Mass and reserved the Blessed Sacrament. Religious formation was given using various means such as classes, meditations or monthly recollections. More than a hundred young people took part in these activities. There were also meetings of formation for professionals.

On the other hand, in the academic year 1935-1936, the twenty five places in the Residence were occupied from the beginning and the friends and acquaintances that came and went were great in number. More than one hundred and fifty students took part in the Christian or professional courses throughout the year. Some of these had joined the Work in the summer of 1935 like Álvaro del Portillo and José María Hernández Garnica, while others would join before the end of that year such as Pedro Casciaro and Francisco Botella.

The University students who attended DYA had different political views although none of these students defended parties opposed to the Church. The contrast between the troubled situation of that time and the serenity of the Residence was striking. St. Josemaría had expressly indicated that politics not be discussed in the group meetings of the residents.

In the aftermath of the Popular Front victory in the February 1936 General Election, social unrest increased. Although the situation demanded prudence, St. Josemaría never stopped promoting the development of Opus Dei. In fact, in July 1936, DYA changed location moving to number 16 in the same street, Ferraz. However, that same month the Spanish Civil War broke out and DYA was closed.

Click here for an interview with the author of the book