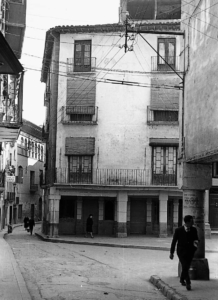 Josemaría Escrivá’s birthplace, before it was demolished in the seventies.

Josemaría Escrivá de Balaguer was born in Barbastro (Huesca, Spain) on January 9, 1902. His parents’ names were Jose and Dolores. He had five siblings: Carmen (1899-1957), Santiago (1919-1994) and three younger sisters who died while still children. The Escrivá couple gave their children a sound Christian upbringing.

In 1915 the business of Josemaría’s father, a textile merchant, went bankrupt and the family had to move to Logroño, where the father found work as a shop assistant. It is in this city that Josemaría senses that God wants something from him, although he does not know exactly what it is. He thinks that he will discover it more easily if he becomes a priest, and so he begins to prepare himself in the seminary of Logroño and later, after 1920, in the seminary of Saragossa. 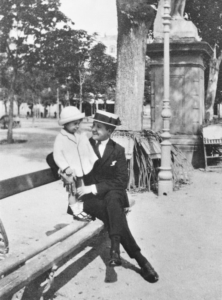 With his brother Santiago in 1921.

On the advice of his father, he also studies civil law at the University of Saragossa as an external student. José Escrivá dies in 1924, and Josemaría assumes the role of head of the family. His mother and brothers move to Saragossa. He is ordained a priest on March 28, 1925 and begins to exercise his ministry in Perdiguera, a rural parish, and later in Saragossa, in the church of St. Peter Nolasco.

In 1927 he moves to Madrid, with the permission of his bishop, to study for a doctorate in law. In Madrid, on October 2, 1928, he sees that God wants him to open, for all kinds of people, a path to holiness through ordinary life and work. That day he begins “the Work of God”-which, translated into Latin, will be for all time “Opus Dei”-without abandoning the pastoral ministry entrusted to him by the Patronato de Enfermos (Foundation for the Sick). There he comes into daily contact with sickness and poverty in the hospitals and working-class districts of Madrid. In 1931, he is appointed chaplain to the Patronato de Santa Isabel (St. Elizabeth Foundation), and in 1934 he is named rector. 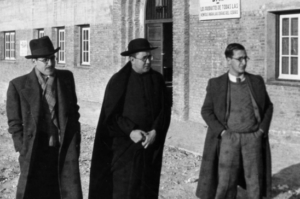 With Ricardo Fernández Vallespín and Juan Jiménez Vargas, two of the first members of Opus Dei, in the mid-thirties.

Josemaría Escrivá is in Madrid when the civil war breaks out in 1936. Because of the religious persecution, he is forced to seek shelter in various places. He carries out his priestly ministry in a clandestine manner until he manages to leave Madrid. Having made a hazardous crossing of the Pyrenees into the south of France, he settles temporarily in Burgos.
In Andorra (December 1937) 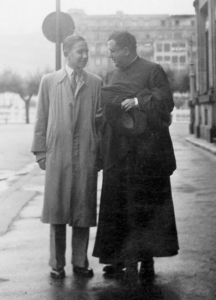 With Julián Urbistondo, then a student in San Sebastián (1944).

When the war finishes, in 1939, he returns to Madrid. That same year he finishes his doctorate in Law and publishes The Way, his best known book. In the following years he preaches many spiritual retreats for lay people, priests and religious throughout Spain. Up until 1946 he also continues to be the rector of the Patronato de Santa Isabel. He directs the expansion of Opus Dei into the principal cities of the Iberian Peninsula.

In 1946 he takes up residence in Rome. He obtains a doctorate in theology from the Lateran University. He is appointed consultant to two Vatican congregations and an honorary member of the Pontifical Academy of Theology as well as an honorary prelate of His Holiness. It is from Rome that he promotes the extension of Opus Dei, after its approval by the Holy See, throughout the five continents. He closely follows the preparations and sessions of the Second Vatican Council (1962-1965) and keeps in close touch with many of the Council fathers. 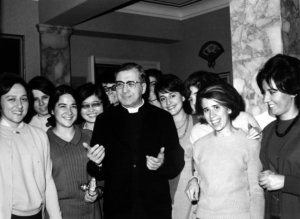 He visits a number of countries in Europe to encourage the establishment and consolidation of the apostolic work of Opus Dei. For the same purpose, between 1970 and 1975 he spends long periods of time in Mexico, South America and Guatemala, where he also holds catechetical gatherings with large groups of men and women. He dies in Rome on June 26, 1975 with a reputation for holiness.

On May 17, 1992, John Paul II beatifies Josemaría Escrivá. He proclaims him a saint ten years later, on October 6, 2002, in St. Peter’s Square, in Rome, before a multitude of people.
Statue of St. Josemaría on the exterior wall of St. Peter’s Basilica in Rome