The Saint Josemaria Escriva de Balaguer Historical Institute (ISJE) has come into being on January 9, 2001.

The aim of the institute is to promote historical studies of St. Josemaria’s life and Opus Dei as well as the development of academic publications (theological, canonical, educational, etc.) of aspects related to the spirit, teachings and apostolates promoted by St. Josemaria. Included in this overall objective, the Institute is responsible for the publication of the Opera omnia of Saint Josemaria. 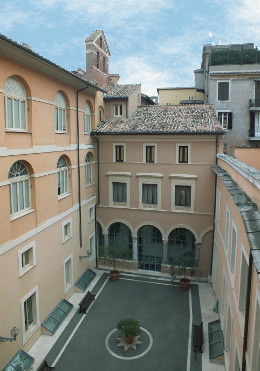 The Institute also intends to promote, sponsor and organize academic meetings, seminars and study days on subjects related to its institutional objectives. To encourage the completion of academic research, the Institute maintains a comprehensive bibliographic resource, consisting of the published works of St. Josemaria and academic works on his person and on Opus Dei, in the library of the University of Navarre (Pamplona, Spain) and in the library of the Pontificia Università della Santa Croce (Rome). The Institute can also provide comprehensive bibliographic information about St. Josemaria and Opus Dei to the scholars who require it. The Institute can also guide researchers in these subject areas. The ISJE has its headquarters in Rome, in the library building of the Pontificia Università della Santa Croce (Via dei Farnesi 83). The Institute relies on the cooperation of the Center of Studies on Josemaria Escriva (CEJE), a section of the ISJE at the University of Navarre.