“Expansion”, a new book about the early years of Opus Dei 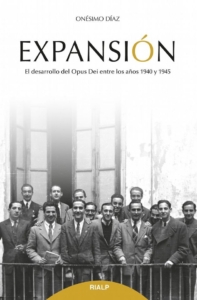 Onésimo Díaz has just published a new book in the collection of monographs of the Istituto Storico San Josemaría Escrivá whose title is: “Expansion. The development of Opus Dei between 1940 and 1945”.

The new book focuses on the development of Opus Dei in the years following the Spanish Civil War and during the Second World War. In a way, this book may be considered a continuation of the books published in the same series of ISJE monographs: “DYA. The Academy and Residence in the history of Opus Dei (1933-1936)” (Rialp, 2016); “In hiding. Opus Dei in the Republican zone during the Spanish Civil War (1936-1939)” (Rialp, 2018), both by J. L. González Gullón, and “Post-war. The first expansion of Opus Dei during the years 1939 and 1940” (Rialp, 2018), written by Onésimo Díaz.

The book describes the expansion of Opus Dei in various Spanish cities, mainly among university students, and the preparation of its international expansion after the world war. The text is divided into five chapters ordered chronologically by academic year. The opening chapter (1940-41) corresponds to the period in which the first international expansion took place in Portugal, led by José Luis Múzquiz. The next chapter (1941-42) relates to the time when the first group of students from the Centre of Studies began to receive formation in the house located at the junction of Lagasca Street and Diego de León Street. The third chapter (1942-43) is about the beginning of activities in Seville and a study week to which the founder only called upon the “older” members of Opus Dei.

The fourth chapter (1943-44) describes the growth of the Work after the approval of the Holy See and coincides with the priestly ordination of three of the first members and the commencement of apostolic activity in Santiago de Compostela. The last chapter (1944-45) describes a progressive development, which manifested itself in the opening of centers and residences in Bilbao and Santiago de Compostela and in the plans for international expansion at the end of the world war.

The book describes the members of Opus Dei during this period, a period that started with only fourteen men and two women and ended with more than two hundred and twenty men and thirty women, and what they did to expand Opus Dei in the main cities of Spain, while at the same time thinking about the imminent international expansion. The report is not limited to the people who asked for admission to Opus Dei in those years, but also includes those who took part in the activities of Christian formation, while not being legally incorporated into the Work.