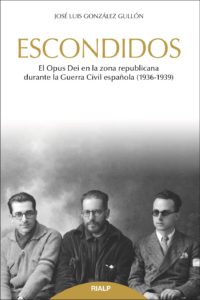 At the time of the outbreak of the Spanish Civil War, most of the members of Opus Dei, founded just eight years earlier, were in the Republican zone. The book begins with a chapter that analyzes the impact of the revolutionary movement unleashed in the Republican rearguard. The harsh repression against those who were considered to be Catholics caused the members of Opus Dei to seek any refuge that would allow them to escape from prison and probable death, not only in Madrid but also in Levante and La Mancha.

The second section focuses on the most delicate moment in the history of Opus Dei during the civil war. Between October 1936 and March 1937, four people of the Work were in prison and two others – including Josemaría Escrivá himself – were hiding in a psychiatric sanatorium.

Saint Josemaría in the legation of Honduras of Madrid

The third chapter studies St. Josemaría’s wide range of activities deployed from his asylum in the Honduran general consulate in Madrid. From that precarious diplomatic headquarters, he managed to make contact with the members of the Work and transmitted his closeness to them.

The escape from the Republican zone by Josemaría Escrivá and a significant group of members of the Work is the subject of the fourth chapter. These pages show the complexity of the challenges faced by the Founder, who constantly wished to fulfill God’s will so that Opus Dei could forge ahead.

Finally, the last chapter is dedicated to the lives of the members of Opus Dei who remained behind in the Republican zone when the founder was no longer among them.

As in the case of his previous monograph on the DYA Academy, published in this same collection, the author has had access to a very extensive documentation which may be said to be practically complete. The result is an entertaining story of great historical quality, which explains the challenge faced by Opus Dei in its endeavour to move forward in the midst of great dangers to its survival, when it still had a small number of members, almost all of them young, and had been in existence only for a few years.

José Luis González Gullón is a History Lecturer at the Pontifical University of the Holy Cross and a member of the St. Josemaría Escrivá Historical Institute. He has published DYA. La Academia y Residencia en la historia del Opus Dei (1933-1939), and El clero en la Segunda República. Madrid, 1931-1936. He is editor, along with other authors, of the Diccionario de San Josemaría Escrivá de Balaguer. Some of his articles on contemporary religious history have appeared in the journals: The Catholic Historical Review, Historia Contemporánea, Hispania Sacra and Studia et Documenta.

You can buy the book here:
Amazon
Casa del libro