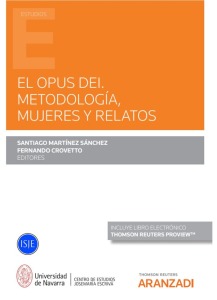 The Saint Josemaria Escriva de Balaguer Historical Institute (ISJE) and the Center for Studies on Josemaria Escriva (CEJE) have just published a book called “Opus Dei. Methodology, Women and Stories” edited by Santiago Martínez and Fernando Crovetto. This monograph is a collection of nineteen studies by researchers from the ISJE, the CEJE and various Spanish universities that cover the history of Opus Dei from the end of the Spanish Civil War to the beginning of the Second Vatican Council.

The studies are divided into three main areas: the methodology about Opus Dei; the role of women in history and, specifically, in the history of Opus Dei; and the Spanish religious context of the 1940s and 1950s, with special attention to Catholic associations.

Within the first main area, six studies present questions such as the methodological difficulties that must be tackled when it comes to historicizing an institution like Opus Dei; the need to establish a periodization that covers the entire history of the institution and serves as a guide for future studies; the need to consult archives that are not always linked to the institution, the incorporation of personal and diocesan archives, etc.; the importance of biographical genre and prosopographical studies to understand the institution; and, finally, the contribution of the publication “Noticias,” which Escrivá and some of his collaborators published in Burgos during the civil war, to help us get to know some of the first people who came into contact with Opus Dei.

In the second part of the book, dedicated to the history of the women of Opus Dei, seven studies analyze the approaches, interpretative theories and themes in research on women in history, and how this type of analysis provides a more comprehensive and integrative account of the past. These studies offer an overview of what has already been published on the history of the women of Opus Dei and present the historiographical challenges and study proposals that will facilitate further progress in the understanding of this essential part of the institution. Finally, the profiles of some of the women of Opus Dei are analyzed, as well as the social rank, geographical origin and religious concerns of some of the first married Spanish women who applied for admission to Opus Dei as supernumeraries.

The third section of the book is dedicated to chronicles. Six studies analyze the religious and cultural situation of Spain in the 1940s and 1950s, delving into the interrelationship between politics, Catholicism and the experience of believers; they study some Catholic institutions and associations such as Catholic Action, the Marian Congregations or the National Catholic Association of Propagandists, which flourished in Spain at this time and which serve to contextualize the framework of the secular apostolate of which Opus Dei was also a prominent element; and, finally, some types of Opus Dei members are presented: diocesan priests and supernumeraries, the latter men and women mostly married.

“Historia del Opus Dei”, the first exhaustive research on the history of...