“Historia del Opus Dei”, the first exhaustive research on the history of this institution 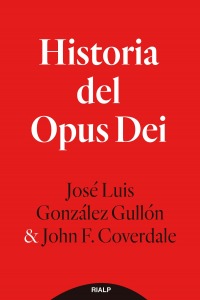 José Luis González Gullón and John F. Coverdale have just published a new book in the monograph collection of the Saint Josemaria Escriva de Balaguer Historical Institute (ISJE), with the title: “History of Opus Dei”. This book presents the first exhaustive research on the history of this institution to have been undertaken while having access to all the surviving documentation and numerous oral testimonies.

This 700-page volume reviews the history of Opus Dei, from its foundation in 1928 up until 2016; a time span that covers the period of the founder and his first two successors, Álvaro del Portillo and Javier Echevarría. It analyzes the beginnings and development, the juridical path followed, the main events experienced, the identity of its members, their achievements and shortcomings, the acceptance of its spirituality among men and women of very diverse conditions in the five continents, and the evolution of its apostolic initiatives. The book closes with a brief epilogue outlining the main events from 2016 to 2021.

The book can be purchased here: paperback | ePub | Kindle