The first volume of the “Letters” of St. Josemaría has been published

The Rialp Publishing House has just published a book containing important unpublished writings by St. Josemaría Escrivá. The book consists of four documents from a wide-ranging collection that the founder of Opus Dei referred to as “Letters”, in which he explained in detail his teachings on Christian life and described events from the history of Opus Dei.

While these writings were intended primarily for members of the institution he founded, nevertheless, they convey ideas and guidance about the spiritual life, the presence of Christians in contemporary society, and evangelization in secularized environments that will be of interest to those who seek to bear witness to Jesus Christ in the midst of the world in which we live, whether they sympathize with Opus Dei or not.

The book contains the critical and annotated version of four of these “Letters”, which date back to the 1930s but which were completed and finalized in the late 1960s. These are writings that St. Josemaría composed over the course of almost thirty years, reworking and expanding them continuously in numerous revisions, until finally his ideas were captured and transmitted for posterity. Some experts believe that these writings are fundamental to a full understanding of the innovative ecclesiastical message of this saint.

Luis Cano, a researcher at the Istituto Storico San Josemaría Escrivá, was responsible for editing the book. He has already contributed to the publication of an earlier collection of unpublished texts by the founder of Opus Dei. These were published with the title In Dialogue with the Lord (Scepter, 2018). The new volume is part of the Collection of Complete Works of Josemaría, a task which has been in progress at the Istituto Storico for several years. The volume has an extensive introduction, written by José Luis Illanes, which explains the history of these writings.

The first of these collective letters is dedicated to considering ordinary life as a path to holiness, which is at the heart of the message that St. Josemaría communicated throughout his life. The second letter focuses on the virtue of humility, which St. Josemaría considered essential for following Jesus Christ and being faithful to Him. The third letter deals with service to God, to the Church, and to all people, a service that Christians are called to perform in the midst of the world. The fourth and final letter of this book presents some guidelines for proclaiming Christ in a strongly secularized world, giving priority to charity and respect for the freedom of those who receive this proclamation.

The book contains 346 pages and includes a foreword by the current prelate of Opus Dei, Msgr. Fernando Ocáriz, a general introduction and an introduction to this current publication. There are also brief introductions to each of the letters in which the methodological criteria, matters of textual criticism and other characteristics of each document are explained. Both the original notes and the critical apparatus are included in which the variations in the various manuscripts and sources are explained. Throughout the text there are brief explanatory notes, as well as biblical and patristic references, etc. The publication has a section of facsimiles, an index of quotations from Sacred Scripture, an index of names and a subject index as well as the bibliography used. 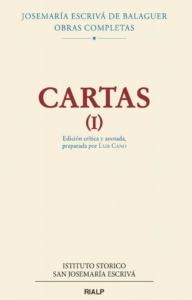 Presentation of Cartas I by Luis Cano
Scroll to top