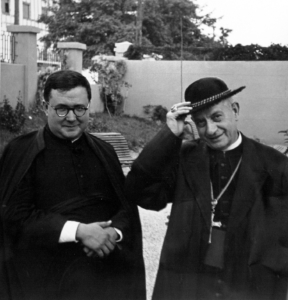 The Istituto Storico San Josemaría Escrivá has just published volume 14 (2020) of the journal Studia et Documenta. The publication is made up of four parts: a monographic study, a section dedicated to the publication of documents, a section on current news and finally a section dedicated to bibliography. The regular studies and notes section is not included in this volume because of the length of the monograph.

The monograph to which the first part of the volume is dedicated is an analysis of the expansion of Opus Dei in the 1940s and 50s, and is in some way a continuation of the monographic study published in volume 3 (2009), which was dedicated to Opus Dei in Madrid in the 1930s. Through the nine studies that make up this section, several topics are presented that were significant in the historical development of this young Catholic institution, at a time when it was expanding geographically throughout the Iberian Peninsula and also taking its first steps elsewhere.

In the first of the studies of the monograph, Julio Montero-Díaz portrays the political, social, religious and cultural context of Spain at that time; a country that in that decade still played a major role in the history of Opus Dei. In the second study Francesc Castells and José Luis González Gullón analyze the development of the main characteristics of the government of this institution, in a period in which it went from a status of no official ecclesiastical approval to definitive approval by the Holy See as a secular institute.

In the third and fourth studies, Inmaculada Alva and Mercedes Montero describe the beginnings of Opus Dei’s activity with women. The third study analyzes the beginning of the apostolate with women from 1942 to 1945 and the activities that were undertaken in this regard. The fourth study analyzes the human, spiritual, doctrinal-religious, apostolic and professional formation that women received between 1945 and 1950.

In the fifth study, Santiago Casas introduces the Study Weeks that were organized in 1940, a milestone in the doctrinal formation and the spirit of the Work that was intended to increase fraternity among all the members of Opus Dei and to prepare for a major expansion of the Work throughout the country. In the sixth study, Constantino Ánchel and José Luis Illanes analyze the juridical path that made possible the incardination of the first priests into Opus Dei, as well as the steps taken so that diocesan priests could belong to the Priestly Society of the Holy Cross. Santiago Martinez then describes the relationship of the founder and his collaborators with various Spanish bishops from the end of the Civil War up until St. Josemaría’s first trip to Rome in 1946. Onésimo Díaz goes on to analyze the official examinations for professorship taken by members of Opus Dei who won academic posts at Spanish universities between 1939 and 1951. And finally, the monograph concludes with a study by Federico M. Requena and Fernando Crovetto that describes the international expansion of Opus Dei, including a prosopography of the members of the Work who carried it out.

In the Documenti section, Enrique de la Lama and Alfredo Méndiz examine the collection of letters that are kept in the General Archives of the Prelature of Opus Dei and in the Archives of the Cathedral of Valencia between St. Josemaría and Archbishop Marcelino Olaechea, Archbishop of Pamplona and Valencia, from 1935 to 1972. Monica Fuster then examines the relationship between St. Josemaría and Cardinal Federico Tedeschini, principally from 1951, when the latter was appointed protector of Opus Dei.

The Notiziario section briefly outlines the publications and documents that exist in relation to Guadalupe Ortiz de Landázuri, the first lay person of the Work to be beatified: there are documents from the ecclesiastical authority, biographies, documentaries, brochures, dictionary entries, studies on specific aspects and other publications that refer to Guadalupe Ortiz.

The Bibliographic Section completes the journal, with the review of 5 publications and the compilation of 6 bibliographic records.

The index can be accessed here.

50th Anniversary of the pilgrimage to Guadalupe

The first volume of the “Letters” of St. Josemaría has been pu...
Scroll to top