Published a biography of Salvador Canals 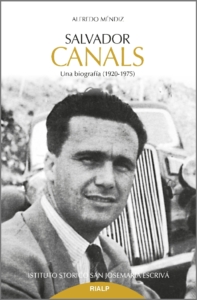 Alfredo Méndiz has just published a new book in the Collection of Monographs series of the St. Josemaría Escrivá Historical Institute. It is called: “Salvador Canals. A Biography (1920-1975)”.

The book focuses on the life of Salvador Canals, a life which, because of the intricate circumstances in which he found himself immersed, sheds light on some key events in the history of his time: above all, events in the particular history of Opus Dei and, because of his intense activity in the Vatican, also events in the history of the Church in general. A priest of Opus Dei, canonist, auditor of the Roman Rota, expert in the motion picture ministry, editor, spiritual writer…: the reasons which call for the figure of Salvador Canals to be better known are wide and varied.

Salvador Canals was born in Valencia (Spain) on 3 December 1920. His father was an engineer, and his paternal grandfather was a politician of some significance, a member of the Spanish parliament between 1903 and 1923 and a minister of the presidency several times, especially with Antonio Maura, the most notable figure of the conservative party.

Canals’ childhood unfolded in Reinosa, a town in northern Spain. There, the Spanish Society for Naval Construction, under the leadership of his maternal grandfather Adolfo Navarrete, had a steel plant in which his father worked between 1921 and 1932. Previously, the engineer Canals had worked in Valencia, and hence Salvador, his first son (Babo, as he was called at home), was born in this city. In 1932 the family, by then complete – father, mother and eight siblings – moved from Reinosa to Madrid.

Commitment to Opus Dei
In 1940 his best friend from the days of Reinosa, Juan Antonio Paniagua, introduced him to Opus Dei. The aftermath of the horrors of the civil war (1936-1939) was a time of vocational fervor among the Spanish youth. On May 8, 1940, after meeting St. Josemaría Escrivá, founder of Opus Dei, Canals was certain that this was his path.
Very soon, in 1942, he set out for Rome, where he remained until his death in 1975. This made him, during his whole life, the person who had longest been “transplanted” (according to the founder’s terminology) in a country other than his own in order to bring the seed of Opus Dei there.

The Church of Vatican II: from theoretical ferment to practical activity
In 1948, Salvador Canals was ordained to the priesthood in Rome. After 1946, when first Alvaro del Portillo, secretary general of Opus Dei, and then Josemaría Escrivá had settled in Rome, Salvador was, for many purposes, the right-hand man of the Blessed Alvaro, just as Blessed Alvaro was the right-hand man of the founder. Thus, for example, he assisted Blessed Alvaro directly in the task of obtaining the first pontifical approval of Opus Dei as a secular institute. Salvador also assisted Blessed Alvaro in the purchase of the headquarters of Opus Dei, Villa Tevere, in the Parioli district of Rome. Furthermore he helped with the formation of the first Italian members of Opus Dei (Francesco Angelicchio, Renato Mariani, Luigi Tirelli, Mario Lantini…), etc. In the Holy See, moreover, he replaced Blessed Alvaro in 1949 as head of the office of secular institutes, a position to which Blessed Alvaro had been appointed two years earlier. This office depended on the Congregation for Religious, of which Cardinal Valerio Valeri had been prefect since 1953. In 1954, Valeri took Salvador, as personal secretary, on a long journey through Canada and the United States which allowed him to make Opus Dei known to important figures of American Catholicism, such as Cardinals Spellman and Léger. Both later officially welcomed Opus Dei in their respective dioceses, New York and Montréal.

In 1954, Salvador Canals was appointed consultant to the Pontifical Commission for Motion Pictures, Radio and Television, and in 1960 he was named auditor of the Roman Rota. He was also an expert at the Second Vatican Council.

A serene and positive spirituality
In 1957, Canals launched the Studi Cattolici journal with some friends. In this journal he was responsible, among other things, for a section on spirituality entitled “Ascetica meditata”. It consisted of short articles that came from the notes of his preaching to different audiences in the field of Opus Dei’s apostolic work: young people, workers, professionals, mothers of families, priests… The generally uncomplicated titles allow one to easily discern the content of each article: “Serenità”, “Custodia del cuore”, “Vita interiore”, “La correzione fraterna”, etc. Canals had a reputation as a good preacher, and these articles, because of their positive vision of Christian life, because of their closeness to the individual soul to which they personally address themselves, and because of the depth of feeling which they instill in the relationship with God, guarantee this prestige. In 1962, Canals brought together in one book (Jesus as Friend) the twenty-six texts that had constituted the whole of this section since 1957. The success of the book, which to date has been published in twelve languages, has transcended all boundaries.
Salvador Canals, a man of delicate health, had several illnesses and limitations during the last years of his life. He died in Rome on May 24, 1975, at the age of 54.

Alfredo Méndiz (Barcelona, 1960) holds a Ph.D. in history, he is Assistant Director of the St. Josemaría Historical Institute (Rome) and author of several publications on St. Josemaría and on the history of the Church. He is co-author of the critical-historical editions of Conversations with Monsignor Escrivá de Balaguer (2012) and Miscellaneous Writings (2018), published in the Collection of Complete Works of St. Josemaría.

The critical edition of “Friends of God” has been published