The monographic theme which is the subject of the first part of the volume explores the expansion of Opus Dei throughout the Americas. This expansion commenced in 1949 when some of the members moved to Mexico and the United States. Shortly afterwards, in the 1950s, the Work began in twelve new American countries (Chile, Argentina, Colombia, Venezuela, Guatemala, Peru, Ecuador, Uruguay, Brazil, Canada, El Salvador and Costa Rica), this number reached twenty two in 1996. 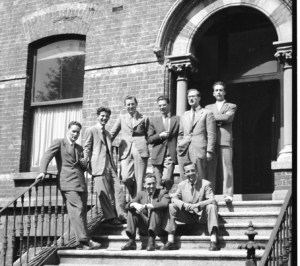 The monographic section consists of three articles, these articles focus on the United States, Argentina and Colombia respectively. In the first article, Federico Requena provides a general panorama of the apostolic activity of the faithful of Opus Dei in the United States between 1949 and 1957, with an overview of the different apostolic activities undertaken during these eight years. In the second article Manuel Pareja focuses on one person, Teodoro Ruiz Jusué, who commenced the apostolate of Opus Dei in Colombia. He analyzes the activities of this priest during the first year, such as finding a house and organizing the first Circles of formation with university students. Finally, in the third article, Ana María Sanguineti explores the history of the Institute for Integral Training in Domestic Studies: (ICIED), an apostolic initiative with a social dimension that was undertaken in Argentina between 1973 and 2017. The initiative was made possible thanks to the existence of a sufficient number of faithful of Opus Dei helped by cooperators and friends. 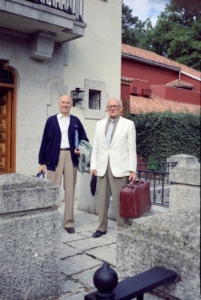 Miguel Deán in 1995, in a coexistence of supernumeraries in Molinoviejo. To his right, the historian Valentín Vázquez de Prada.

The Studi e Note section consists of four articles. The first article by Chris Noonan examines the establishment in 1954 of the Nullamore University Residence in Dublin and the commencement of Opus Dei’s apostolic activities in Ireland. In the second article, Alfredo Méndiz explores the initial stages of the “St. Gabriel’s work” between 1928 and 1950, that is, the apostolic activity with persons who are married or have a prospective vocation to marriage. Special attention is paid to the Founder’s earliest writings on this subject and to the first Supernumeraries who joined Opus Dei around 1948. The third article is written by María Hernández Sampelayo and María Eugenia Ossandón and consists of a prosopographic study of the first female associate members of Opus Dei between 1949 and 1955. Finally, Martin Aurell presents a biography and a historiography of José Orlandis (1918-2010), a member of Opus Dei from 1939, a priest and professor of History of Law at the Universities of Zaragoza and Navarre.

In the Documenti section, Francesc Castells examines the postal correspondence between Josemaría Escrivá de Balaguer and Msgr. Manuel Fernández Conde, Bishop of Córdoba (1959-1970). María Jesús Coma presents the first issue of Noticias, published in March 1938. This was a monthly family-type newsletter which the Founder sent to the young men who had taken part in the Christian Formation activities in Madrid, namely in the DYA Academy-Residence.

The Notiziario section contains a brief overview of the activities of the Istituto Storico San Josemaría Escrivá.

The Sezione Bibliografica brings the volume to a close. The review and bibliographical record of sixteen recent publications are presented, as well as an extensive list of works published between 2010 and 2013 about the Prelates of Opus Dei, Álvaro del Portillo y Javier Echevarría.