“En diálogo con el Señor” (“In dialogue with the Lord”), a new volume of the Complete Works Collection

This is a critical-historical edition of the texts of talks and meditations that St Josemaría gave to the faithful of Opus Dei who lived in Rome between 1954 and 1975. From this preaching, audio recordings and complete notes have been preserved. Between 1967 and 1975, St. Josemaría revised this material and the texts were published in private collections for the formation of the faithful of Opus Dei. They are now made available to the general public. 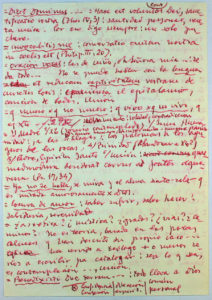 Front page of the outline for the meditation of November 26, 1967, which appeared under the title of “Our Way on Earth” and which was later largely rewritten in “Friends of God” with the title of “Toward Holiness”.

The volume includes an extensive foreword on the preaching of St. Josemaría and contains a selection of facsimiles, with the original outlines of three of the meditations that are published. It also includes a selection of photos taken on several of the occasions mentioned in the book. Each text is preceded by a brief introduction: an explanation of the context, a summary of its content and an analysis of the sources; and each text is accompanied by abundant notes and comments, whether analysis of the text or theological-spiritual or historical observations.

The work was carried out by Luis Cano and Francesc Castells, with the collaboration of José Antonio Loarte. The publication opens with a prologue by Bishop Javier Echevarría – who was the prelate of Opus Dei from 1994 to December 2016. He was able to read a draft of the book a few weeks before his death.

The words of St. Josemaría in this volume reflect the spontaneity and depth of his preaching. The first three texts, from the period 1954-1955, are taken from meditations that St Josemaría addressed to the students of the Roman College of the Holy Cross. In this college there were young men from many different countries spending a period of special human and spiritual formation close to the founder. The succeeding meditations between 1962 and 1967 were preached to his direct collaborators in the government of Opus Dei or to the vicars of the different regions meeting in Rome to work with St Josemaría for a few days. In the texts that go from 1969 to 1975 there are a series of meditations, a brief homily and several talks.

In a natural and direct manner he deals with various themes of the Christian life, especially prayer and contemplation in the midst of the realities of ordinary life – the primary focus of his teaching as a founder – and of other topics related to love of God, the ascetic struggle, the situation of the Church, etc. There are also abundant autobiographical data and details about the history of Opus Dei.

The text entitled “Tiempo de acción de gracias” (“Time of thanksgiving”) brought together words of St. Josemaría in various get-togethers, including the one that appears in the photo, Villa delle Rose, on December 27th 1972.

Blessed Pope Paul VI said that the preaching of St. Josemaría was a treasure for the whole Church. Indeed, although his exhortations were directed here to members of the institution he founded, much of his advice and his many reflections may be of interest to any Christian, whether or not associated to Opus Dei, if he wants to grow in life of prayer, while increasing his love for Jesus Christ, and improving his evangelizing testimony.

This volume represents the launching of series V – dedicated to oral preaching – in the Collection of the Complete Works of the founder, carried out by the Historical Institute. Work is underway on the classification and ordering of unpublished material that is kept in the General Archive of Opus Dei, with a view to its future publishing. This task will require some time, as it is a fairly large collection, and will need patient work over the coming years.

The publication presents several indexes, in addition to the general book index: texts from Sacred Scripture, people mentioned, analytical table of contents and bibliography cited. In all, the volume contains XLV + 460 pages.

Luis Cano has a degree in Law (University of Navarra) and a doctorate in Spiritual Theology (Pontificia Università della Santa Croce, Rome). He is Secretary of the St. Josemaría Escriva de Balaguer Historical Institute and professor of Church History at the Istituto Superiore di Scienze Religiose all’Apollinare in Rome, where he has been living since 1989. His fields of research include the life of St Josemaría and the history of Opus Dei as well as the history of devotion to the Sacred Heart and Christ the King.

Francesc Castells i Puig holds a degree in History (Universitat de Barcelona) and a PhD in Philosophy (Pontificia Università della Santa Croce, Rome). He is a member of the St. Josemaría Escrivá de Balaguer Historical Institute; he works in the General Archives of the Opus Dei Prelature. He has published several articles on St. Josemaría Escrivá and the history of Opus Dei.

You can buy the book in:
Amazon
La Casa del Libro

You can read an interview with the editors here.
You can download a part of the book here.

New director of the ISJE
Scroll to top