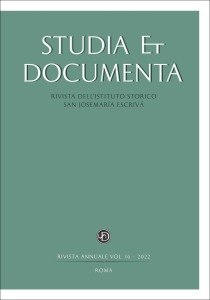 The Istituto Storico San Josemaría Escrivá has just published volume 16 (2022) of the journal “Studia et Documenta”. The publication consists of five parts: a monographic report, a section on studies and notes, a section dedicated to the publication of documents, a section of news items, and finally a bibliographical section.

The theme of the monograph is a review of the women of Opus Dei who helped the institution to move forward. The report looks at how these individuals took advantage of the limited opportunities that were available to women in the mid-20th century in order to forge new paths: many undertook university studies; some travelled to different places and organized their own initiatives centered on human and Christian formation. This topic opens up a line of research that has received little attention in academic circles, a line of research, which may provide a better understanding of the role of women in the Church and more specifically in Opus Dei.

The monographic report is made up of three studies, the first of these, written by Francisca Colomer, examines the development of Opus Dei among women in Valencia from 1940 to 1975. The second article, written by Inmaculada Alva, describes the beginnings of Opus Dei in the United States under the guidance of Nisa González Guzmán, from 1950 to 1952. The article describes the efforts of the first women who arrived in that country to get to know a culture that was very different from their own Spanish culture and the difficulties they had to overcome in order to organize apostolic activities. Lastly, in the third study, Beatriz Comella profiles the women of Opus Dei who received doctorates in theology at the Universities of Navarre and the Pontifical University of the Holy Cross between 1973 and 2018. An explanation is given as to the motives that led the founder of Opus Dei to encourage studies of this kind for women, in a field reserved mainly for priests; the article also explains the scale of the educational project for women promoted by Opus Dei.

The Studi e note section contains six studies of different types. In the first study, Carlo Pioppi analyses the early years of Saint Josemaría’s life up until the foundation of Opus Dei in 1928, This is a text with an academic approach combining the various partial studies or hagiographical works already in existence while delving into the documents from this period which are stored in the Opus Dei Archives in Rome. In the second study, Fernando Crovetto analyses the relations between St. Josemaría and Ángel Herrera Oria, of Catholic Action, in the 1930s. Next, María Blanco presents the academic influence of one of St. Josemaría’s lesser known works, “The Abbess of Las Huelgas”, his only book on a non-spiritual topic.

This is followed by a study written by Isabel Troconis concerning the awarding of an honorary doctorate to the then Cardinal Ratzinger by the Faculty of Theology of the University of Navarre in 1998. The article gives an overview of the Cardinal’s visit and his five-day stay on the University campus, as well as the process that led to his honorary doctorate. Next comes a historical-theological study by Juan Rego on the Preces of Opus Dei, a prayer proper to the faithful of the Work composed by St Josemaría in 1930 drawing from the heritage of litanies and antiphons of the Roman rite. The section concludes with a study by José Luis Illanes in which he presents a historical and chronological view of the expressions “divine filiation” and “sense of divine filiation” that have appeared in the writings of St. Josemaría Escrivá, with a theological analysis.

The Documenti section features just one study that presents an annotated edition of the collection of letters between the abbot of the Monastery of Montserrat, Aureli M. Escarré, and Saint Josemaría Escrivá, from 1941 to 1966, with a total of 128 letters.

The Notiziario section includes a brief overview of the First International Congress about the history of Opus Dei, which took place in the University of Navarre building in Madrid in June 2021. Some details are also provided about the digital repository of Opus Dei created in Chile.

The journal concludes with the bibliographical section, which includes a list of publications about Saint Josemaría Escrivá between 2014 and 2017.

The table of contents can be viewed here.
Buy the journal here.

The second volume of the “Letters” of St Josemaría has been pu...