The Isituto Storico San Josemaría Escrivá has just published Volume 9(2015) of the journal Studia et Documenta. As always, the journal is divided into five parts: a monographic study, a studies and notes section, a section dedicated to the publication of documents, there is also a section dealing with recent news and finally there is a bibliographic section. 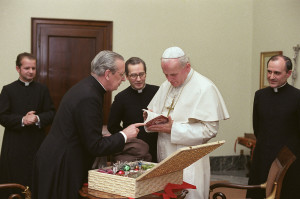 Blessed Álvaro del Portillo, following a Polish custom on the feast of St. Nicholas de Bari, presenting some simple gifts to the recently elected Pope St. John Paul II. Msgr. del Portillo, commented that it was “a kind gesture that children would have for their father”.

The subject chosen for the monographic study, which makes up the first part of the publication, is an analysis of the figure of Msgr. Álvaro del Portillo, beatified on the 27th of September; the centenary of his birth was celebrated in 2014. A series of four articles, prefaced by an introduction, analyze a range of characteristics of the life of the first successor of St. Josemaría Escrivá at the helm of Opus Dei. These articles are not to be considered as outlines but rather as studies which seek to clarify facts or provide useful interpretative tools for future research about Blessed Álvaro, a key figure in the history of Opus Dei.

The first article, written by F. Requena, analyzes those men who were the Theology Professors of Blessed Álvaro del Portillo. St. Josemaría wanted to give a thorough ecclesiastical preparation to the first members of Opus Dei to be ordained. This is why he selected, with great care, a prestigious and highly qualified teaching faculty. This instruction provides the key to a more profound examination of various aspects of Blessed Álvaro’s later activity: from his responsibilities as head of Opus Dei to his relationship with Theologians and Canon Lawyers of the twentieth century as well as his activity at the Second Vatican Council or the revision of the Code of Canon Law.

Indeed, his activity at the Second Vatican Council forms the basis of the second article in the monographic study section. In this article, Manuel Valdés analyzes Blessed Álvaro’s work as secretary to the Commission De Disciplina Cleri et Populi Christiani, as well as his contribution to the work which led to the final draft of the Decreto Presbiterorum Ordinis. 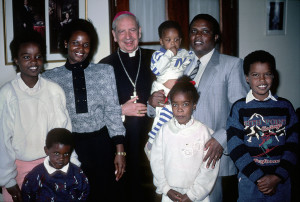 Msgr. Álvaro del Portillo with a family during his visit to Kenya in 1989.

The final two articles in the monograph examine aspects of the life of Msgr. del Portillo as head of Opus Dei. The first article, written by Carlo Pioppi, explores the expansion of Opus Dei between 1978 and 1993 in some South and Central American countries (Bolivia, Honduras, Trinidad and Tobago, Dominican Republic and Nicaragua) and in Europe (Sweden, Finland, Czechoslovakia, Hungary and Poland) – this study will be followed by a second article to be published in a future edition of Studia et Documenta. The final article by M. E. Ossandón investigates the friendship between Blessed Álvaro and St. John Paul II. This relationship was based on the filial relationship that Msgr. del Portillo felt for the Pope who was a younger man, a relationship which characterized the greater part of his time as head of Opus Dei.

The Studi e Note section includes three articles about different aspects of the life of St. Josemaría and the growth of Opus Dei in Nagasaki. The first article by J. F. Baltar is about the Law studies pursued by St. Josemaría in the University of Saragossa. These studies were civil in nature and were carried out by St. Josemaría partly on the advice of his father. This would permit him to be present in surroundings outside the Seminary, an opportunity he used to carry out an intense apostolate among his teachers and fellow students. Next, a study by Nicolás Álvarez explores the preaching of Spiritual Exercises by St. Josemaría to Diocesan Priests during the years 1938-1942. Commencing from the preaching outlines and the written testimonies of those who listened to the preaching, the structure, content and sources of the preaching are analyzed while placing them in the context of the biographical iter of the founder of Opus Dei as well as the historical and spiritual context of the Church in Spain characterized by the recent end of the Civil War.

This section concludes with a study of the foundation in 1978 of Nagasaki Seido School, a primary and secondary girl’s school representing the first school in Japan inspired by the teachings of St. Josemaría. The article also explores the beginnings of Opus Dei in Japan and in Nagasaki. This is a continuation of an article on this topic published in Volume 1(2007) of Studia et Documenta. 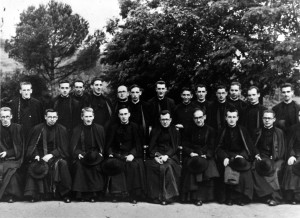 St. Josemaría with Basque Priests to whom he preached Spiritual Exercises in a photograph taken on the 30th of June 1939 in Vergara.

The section dedicated to unpublished documents, Documenti, contains an article by A. Méndiz about three circular letters written by St. Josemaría in Burgos addressed to all the members of Opus Dei between 1938 and 1939. The central topic clearly perceptible in these letters is the resumption of the activities of Opus Dei, a fresh commencement presented by St. Josemaría with great expectation and enthusiasm.

The reader will find in the Sezione Bibliografica section two book reviews: the first review prepared by L. Cano, examines the critical-historical edition of Christ is passing by while the second review composed by M. de Salis looks at the St. Josemaría Escrivá de Balaguer dictionary. This section also contains 14 bibliographical notes and an index prepared by J. M. Fernández and S. Martínez containing the bibliography about Opus Dei, its faithful and apostolic initiatives published between 2003 and 2009.

The proceedings of the conferences celebrated in Rome on St. Josemaría Escrivá...