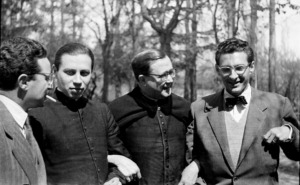 The Istituto Storico San Josemaría Escrivá has just published volume 15 (2021) of the journal Studia et Documenta. The volume is divided into four parts: a monographic section, a section of studies and notes, a section dedicated to the publication of documents, and a bibliographical section.

The monograph focuses on the study of the consolidation and expansion of Opus Dei in the period between the first two general congresses (1951-1956). This study is, in a way, a continuation of the monograph of the previous issue of the journal, which addressed the development of Opus Dei in Spain in the 1940s.

The monographic section is divided into six studies. The first study which is written by Carlo Pioppi, describes the historical context of the period. It highlights the events that took place after World War II and throughout the 1950s at both the political and religious levels on a global scale: This was a period that saw the expansion of Opus Dei not only in Spain but also in other European, American, African and Asian countries. The second article, by Francesc Castells and José L. González, recounts the celebration of the First General Congress of Opus Dei in 1951, which took place in two phases, one for men and the other for women, both presided over by Escrivá. This was a time when the Work had reached maturity and it was necessary to review certain issues and give impetus to the institution. The article ends with a transcription of the minutes of all the sessions of the Congress.

This is followed by two articles, one by Constantino Ánchel and the other by María E. Ossandón and María Hernández Sampelayo. These articles study the first associate members of the Work. Ánchel narrates how the approval of Opus Dei as a secular institute initiated the itinerary which made possible the appearance of the figure of the associate member. He concludes the article with the presentation of the first four vocations. The second article centers on the historical context surrounding the life of the first Associates, with a very detailed description of the formation they received and an explanation of the novelty implied by this lay lifestyle.

The next article, written by Santiago Martínez, narrates the process of the creation and consolidation of the Priestly Society of the Holy Cross. The article analyzes the attitude of the bishops towards this new reality that allowed for the incorporation of secular clerics, incardinated in their respective dioceses. The monograph concludes with a study by Fernando Crovetto and Federico M. Requena on the expansion of Opus Dei in various countries throughout the first half of the 1950s, in the period between the definitive approval and the Second General Congress. The authors offer insights to better understand the factors that influenced the choice of the countries where the Work spread, as well as a prosopography of the people who played a leading role in this expansion.

In the Studi e Note section, Federico M. Requena explores the concept of the Secular Institute and how Opus Dei was initially considered to be a reference model but later it was concluded that the idea of a Secular Institute was not in keeping with the nature of Opus Dei. His study pays special attention to the relationship between Joseph E. Haley, an enthusiastic supporter of the secular institutes in the United States, and José Luis Múzquiz.

The Documenti section is made up of two studies. In the first study, by Alfredo Méndiz, the annotated text of the report of José Luis Múzquiz’s trip to Portugal in March 1941 is presented. As part of a visit on behalf of the Spanish authorities in the field of scientific research, Múzquiz was able to make contact with a large number of Portuguese university lecturers and students. In the second article, Luis Cano presents some texts from the oral preaching of St. Josemaría Escrivá, which are the outcome of talks he held with a wide variety of people in 1970. In these talks he spoke on a wide range of topics related to the spiritual life and the situation of the world and the Church.

The bibliographic section completes the journal with 9 book reviews, 14 bibliographic records and a list of publications by and about the current Opus Dei prelate, Fernando Ocáriz, between 1972 and 2013.

The index can be accessed here.

“El hecho inesperado”, a book about the first women in Opus Dei